How Chaika saved a friend from weapons and drugs - Russian Criminal

The family of the former Prosecutor General Yuri Chaika, after his resignation, took the rule to live, in principle, not a day without a scandal. Administrative resources are decreasing, but the desire to act as before, when Chaika was the head of the GP, remains. Lawyer Katya Gordon posted on her YouTube channel an appeal from the wife of the son of the ex-prosecutor general, dollar millionaire Artyom Chaika Marina.

According to the telegram channel VChK-OGPU, they have been married for more than 20 years, Marina decided to divorce because of her husband’s behavior. As a result, her passport was taken away, “threats are being made to the family,” and the guardianship authorities made it clear that in the event of a divorce they would be on the side of her husband (the couple has four children). “Artem Chaika didn’t leave me the right, except for public defense,” Marina says with tears. Three children support her and ask their father not to threaten them, to give the mother a divorce and not to separate the family. Marina Chaika filed three claims against her husband Artem Chaika, including for the payment of alimony. According to Marina, the dollar millionaire Artyom Chaika took her documents, stopped paying for the rented house and supporting the children. Now he is reminded of his paternal obligations through the court. Artem Chaika continues to use administrative resources, including guardianship authorities. At the same time, as it became known to Rucriminal.info, the famous lawyer Pavel Zaitsev submitted an application to the Prosecutor General Igor Krasnov. It states that the ritual business of the Tver region is being taken over by people close to Artem Chaika and under his leadership. We are talking about the Kimr prosecutor of the Tver region Sergei Lindt and the businessman Alexei Vekshin. This address, which was cited by the telegram channel "Truth Aggregator", tells about the very strange aspects of the relationship between Artyom Chaika and Vekshin. In particular, in 2017, during a search at Vekshin’s, weapons and drugs (more than 200 grams) were found, and after the intervention of the Prosecutor General’s Office (then Yuri Chaika was the prosecutor general), an unemployed citizen was charged that he ... threw all these items to Vekshin. 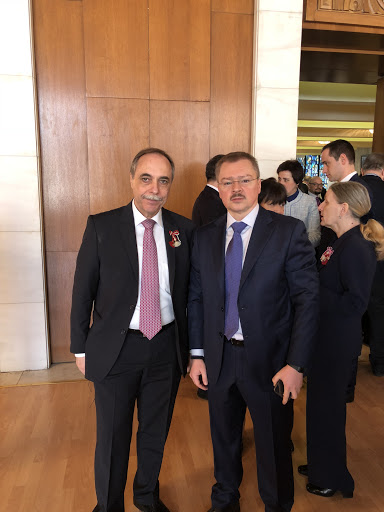 Here are excerpts from Zaitsev’s address: ““ Vekshin A.G. for several years he has been on friendly terms with Artyom Chaika (and his friends), who is the son of the former Prosecutor General of the Russian Federation. This fact is confirmed by the fact that when in September 2017. in the apartment of A.G. Vekshin officers of the Ministry of Internal Affairs of Russia seized more than 200 grams of synthetic drugs, a combat pistol, cartridges for it and a grenade (during the search Vekshin A.G. even admitted that he had brought a grenade), in the city of Kimry, Tver region, as many employees of the General Prosecutor’s Office arrived! You can check this fact in your department and establish who initiated this check and who went to Kimry for this. And in an amazing way, everything at once "turned upside down." Vekshin A.G., who was seized in a very large amount of drugs, weapons, ammunition and a grenade became a victim, and the unemployed Paukov D.V. (whom I defended by chance, and his interests and the interests of LLC "Assistance 1" do not contradict each other), was accused of having confiscated everything from Vekshin A.G. to the last one. And this is despite the fact that Paukov was unemployed, and what was confiscated during a search is quite expensive on the black market. The main evidence of Paukov’s guilt was traces of his alleged DNA found on the seized one, but all of them were destroyed during the examination. and now it is impossible to check it. And all this happened after the intervention of employees of the General Prosecutor’s Office. How often are employees of the General Prosecutor’s Office of the Russian Federation sent to the regional center on such an "ordinary" case? I think no. And you will be able to understand the reasons for this, as well as why suddenly the prosecutor Lindt S.V. began so "zealously" to help AG Vekshin, from whom so much illegal was confiscated in his apartment. I can assume that the prosecutor Lindt C.The. all actions in favor of business Vekshina A.G. undertook from careerist motives and hoped that Artyom Chaika and his friends would intercede about him before the then Prosecutor General of the Russian Federation, Chaika Yu.Ya. Vekshin A.G., understanding the above, wishing to benefit from this and make money, persuaded the prosecutor Lindt S.The. to abuse of office and to illegal representation of his interests in various state bodies. To this end, by the end of 2019, Vekshin A.G. built a room at the address: Tver region, Kimry, st. Ordzhonikidze, 84, where he decided to place the Bureau of the EE and the municipal morgue, brought there the appropriate equipment for the morgue. In this case, fair competition in the provision of funeral services will disappear, and the Bureau of SM E will be from A.G. Vekshin. depend on the production of forensic examinations.


In light of such actions of the prosecutor Lindt C.The. with regard to the experts, it is possible that after the intervention of Artem Chaika and the inspection of the General Prosecutor’s Office in 2017, a possible "request to whitewash" the entrepreneur. Vekshina A.G., prosecutor Lindt S.The. out of careerist motives, he could influence the experts who carried out expert examinations in the criminal case, where in the apartment of A.G. Vekshin. drugs, weapons, ammunition and a grenade were seized. And only thanks to these actions Vekshin A.G. could avoid criminal liability. On this fact, LLC "Assistance 1" has previously repeatedly applied to various, including government agencies, but there was virtually no reaction, since until now the Bureau of the SME and the morgue have not yet moved to the premises of A.G. Vekshin. The specified move of the Bureau of the EEMS is tentatively scheduled for early August 2020 ".